Some kids are difficult to feed because they are picky about what they eat, especially with regards to how their food tastes and looks like. Fortunately, a little color, yummy flavoring, and a dash of creativity can help stir up their enthusiasm for a nutritious bowl of Lucky Charms!

Lucky Charms is an oat-based cereal mixed with a few marshmallow pieces. It has become a favorite everyday breakfast for many people around the world because of its availability throughout the year. However, an interesting thing happens when a large amount of the cereal is consumed, or after it has been eaten regularly for several days. Is there a connection between green poop and Lucky Charms? Let’s find out. 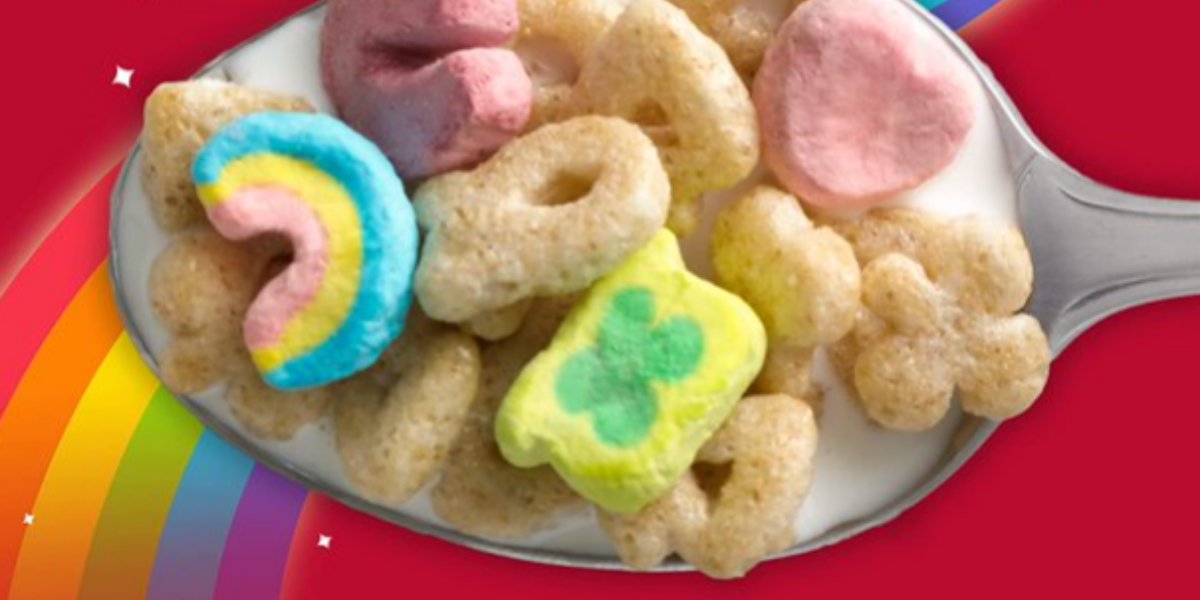 It all started more than 50 years ago when John Holahan, vice president of General Mills, and his team were assigned to create a new brand of cereal for kids within six months. They experimented with a bowl of Cheerios, chopped up pieces of circus peanuts, and came up with the then revolutionary oat cereal and sugar combination. The product, Lucky Charms, became the first marshmallow cereal and was introduced in 1964.

Lucky Charms’ original oat pieces came in shapes of fish, bells, arrowheads, and marshmallow pieces in the form of pink hearts, green clovers, yellow moons, and orange stars. Aside from the original Lucky Charms, they also offered Berry Lucky Charms and Chocolate Lucky Charms which were all promoted by the brand’s official mascot, Lucky the Leprechaun. To this day, the distinctive leprechaun is still featured in the Lucky Charms packaging. 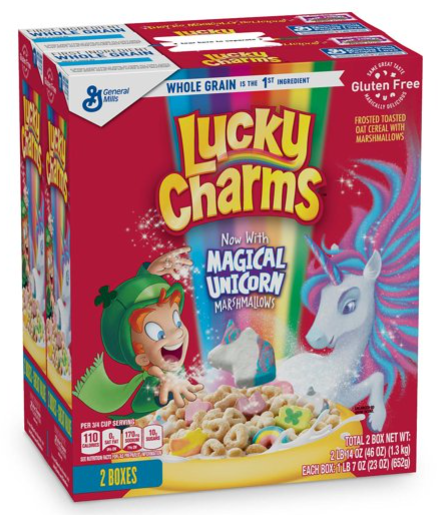 Lucky Charms is considered to be one of the better choices of cereal because it is both delicious and nutritious. Here is the nutritional value of 1 cup or 36 grams of Lucky Charms according to the % daily value (DV) based on a 2000-calorie per day diet:

Amount Per Serving   As Packaged  With 1/2 cup skim milk

Cereals are typically high in nutrition and Lucky Charms is no different. The various nutrients contained in Lucky Charms help prevent certain diseases and provide ample amounts of energy to keep you going throughout the day. If you need a quick energy boost, a serving of Lucky Charms provides 22 grams of carbs which is enough to do the trick.

Here are some benefits of eating Lucky Charms:

However, while this cereal contributes to your daily vitamin and mineral requirements, it is not from whole foods and contains artificial food coloring so your body may have difficulty processing the food. 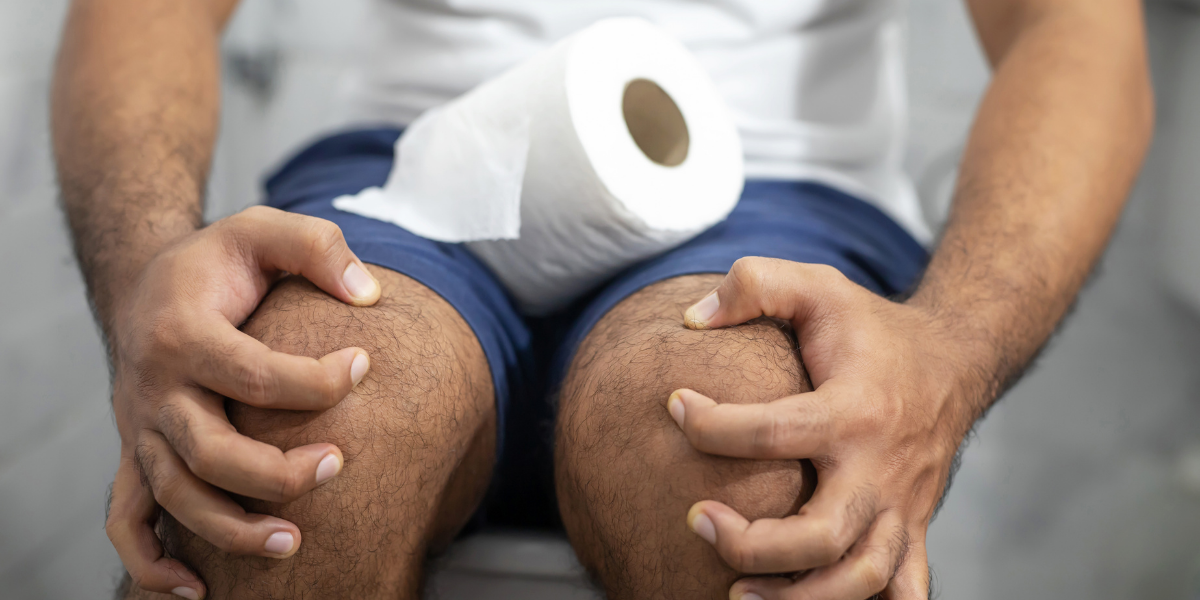 Lucky Charms Disease can cause some degree of discomfort, but does no permanent damage to the intestines nor lead to serious diseases. In fact, most people can solve this dilemma within 48 hours by simply removing Lucky Charms from their diet.

According to the Pediatric Associates of Northern Colorado, unusual stool colors are almost always attributed to food coloring or food additives. Therefore, green poop is mostly caused by what has been eaten more than any actual medical condition.

The unusual stool colors that may be attributed to disease are red, white, and black. However, it is quite normal when black stool results as a side effect of taking iron supplements and is not a cause for concern.

Normal stool colors are brown, yellow, tan, or green although green stools are often mistaken for black stools under poor lighting. So is there a connection between green poop and Lucky Charms? The answer lies in the ingredients contained in the popular cereal, such as:

Blue 1 is a greenish-blue dye that was originally derived from coal tar, although it is now made from an oil base. It is typically found in ice cream, candy, icing, baked goods, and other consumables. There is no natural blue coloring currently in use in the US so foods that are not naturally blue or green will likely contain Blue 1.

Have you ever experienced consuming these blue-colored foods or beverages such as Blue Gatorade, Blue Kool-Aid, and blueberry-flavored drinks only to discover bright green poop right after you take a dump? Well, you are not alone.

Although generally considered safe, Blue 1 can be poorly absorbed from the GI tract. When consumed in sufficient amounts, Blue 1 can mix with bile, a greenish-yellow digestive fluid secreted by the liver and stored in the gallbladder. The combination can turn your poop into a bright, fluorescent green color.

Apparently, the food coloring you consume doesn’t have to be green to make your poop green. Aside from blue dye, purple, black, and red ones may also lead to green stool.

Red 40 is a dark red food dye made synthetically from petroleum. It is commonly found in candy, sports drinks, condiments, and cereals.

According to an article in verywellhealth.com updated on January 9 of this year, purple, or red food coloring –such as Red 40– can also cause dark or bright green poop.

Trisodium phosphate is a food additive and preservative made from a combination of sodium and phosphate. It is used as an emulsifier, thickening agent, moisture retainer, and acidity regulator of food products and serves to extend their shelf-life.

Although the Food and Drug Administration has approved the use of trisodium phosphate in the food industry, many health experts are still concerned about the potential health risks that it can cause. Trisodium sulfate can be found in bread, processed meats, canned soups, packaged baked goods, and cheese. In cereals such as Lucky Charms, it helps to adjust the color of the cereal and the acidic nature of the food.

The FDA has declared that it is safe to ingest up to 70 grams of the additive every day but consuming high amounts of it can cause gastrointestinal symptoms such as abdominal pain, vomiting, and diarrhea.

On the other hand, an article in schoolyardsnacks.com said that consuming just 1 gram of trisodium phosphate is enough to trigger gut issues like abdominal pain and diarrhea.

Diarrhea often causes food to pass through the intestines too quickly. When this happens, the bile pigment does not have enough time to break down sufficiently and, when combined with the artificial food coloring contained in Lucky Charms, can make stool become green in color.

Other Causes Of Green Poop 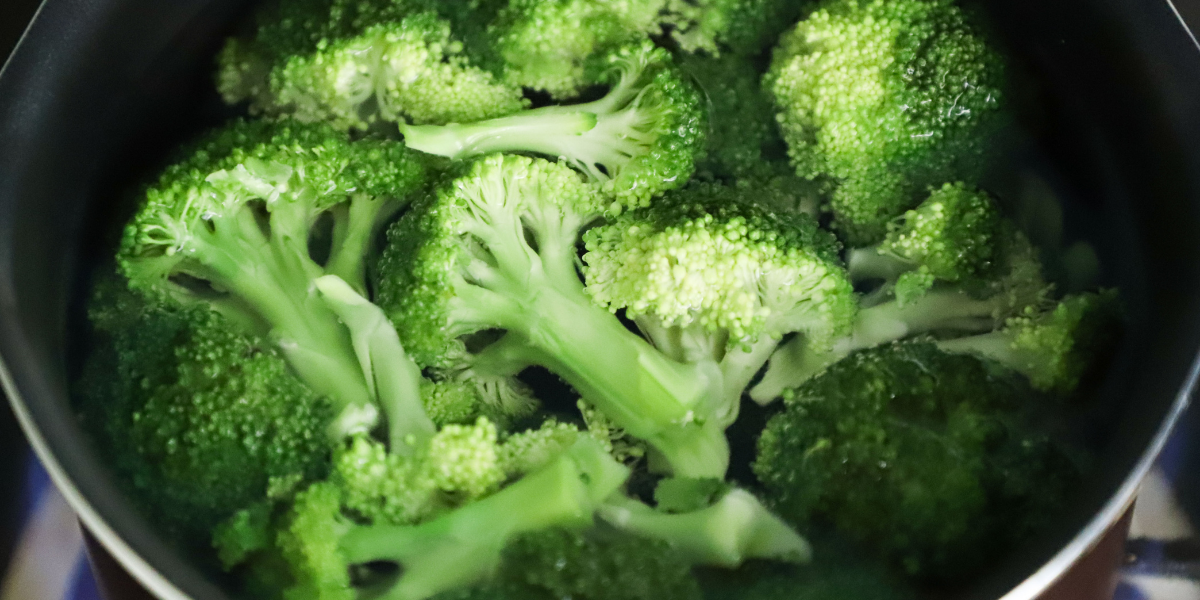 You may not expect it but green poop is not that uncommon. As mentioned earlier, the liver produces a greenish liquid called bile which is responsible for softening stools and making them look brown in color. As bile passes through the intestines, its color gradually transforms from bright green to yellow to brown.

However, there are instances when bile moves through the intestines too quickly. When this happens, bile does not have enough time to break down and undergo a change from its original green color and this results in green stool or green diarrhea.

Here are some reasons why bile can move through the intestines too quickly:

Aside from bile’s accelerated transit through the intestines, here are some other factors that may cause green poop:

Green, leafy vegetables, green fruits, and certain herbs contain chlorophyll which is the pigment that gives plants their green color. These plant foods can make you produce green stool if you eat a considerable amount of them.

However, the factors above tend to produce a more natural, dark green color, unlike the bright and almost neon green color brought about by artificial food dyes that can also be found in:

Although green poop can be alarming, it is usually nothing serious unless it has been going on for days or is consistently accompanied by vomiting, fever, diarrhea, or symptoms of other health issues.

Although Lucky Charms does have some nutritional value, its considerable sugar and dye content are potential health risks. For example, the dyes such as Yellow 5 & 6, Red 40, and Blue 1, which are among the ingredients of Lucky Charms, have been linked to health concerns in children such as behavioral issues and allergies.

In April 2021, a report based on the findings of researchers from UC Berkely and UC Davis confirmed that there is a link between the consumption of synthetic food dyes and neurobehavioral issues –in particular, hyperactivity– for some children.

These findings were also supported by the results of a study published in the UK medical journal, The Lancet, in September 2007. This led to the European Parliament requiring products containing these food dyes to carry warning labels informing consumers of the potential risk.

In spite of the toilet surprise and alleged side effects, Lucky Charms remains a fairly healthy breakfast that can help kickstart your energy for the rest of the day. A nutritious bowl of Lucky Charms is a good source of vitamins and minerals. However, it does contain a considerable amount of sugar so this breakfast cereal may not be the ideal choice for everyone.

Artificial food coloring, some medications, and certain foods can result in green poop. The dyes contained in Lucky Charms may cause changes in the natural color of your stool, but usually, there is nothing to be afraid of. So is there a connection between green poop and Lucky Charms? The answer is a definite yes!