4 Reasons Cheerios Can Cause Diarrhea

You asked and we're here to answer: Can Cheerios cause diarrhea?

The short answer is Yes, they can.

Cheerios is a brand of the behemoth General Mills company. The cereal was first produced in 1941 and was originally called CheeriOats, but later changed to Cheerios after changing the cereal shape to that of an "o".

Generally speaking the cereal is at the top of the list when it comes to health benefits, and certainly is a better choice than competitors like Fruity Pebbles and Captain Crunch.

Cheerios is made of 100% whole grain oats, has only 1g of sugar per serving (for Original flavor), has been made "gluten-free" since 2015, and stopped the used of GMOs a year prior.

Oats are naturally gluten-free. The reason the cereal was never labeled as such is because of the manufacturing process and how the farmers who they obtain their oats from rotate crops with wheat, barley, etc. which have gluten that gets mixed in with the oats on some level. Now, however, they have implemented new procedures and sifting processes to make sure only oats, gluten-free, make it into the Cheerios cereal.

Diarrhea is a common symptom experience by those who are gluten intolerant or have celiac disease and eat gluten in their diets. The choice of General Mills to go gluten-free was a good one.

However, there are other reasons Cheerios can cause diarrhea.

First we need to take a look at the nutrition facts and ingredients to see what exactly we are eating. 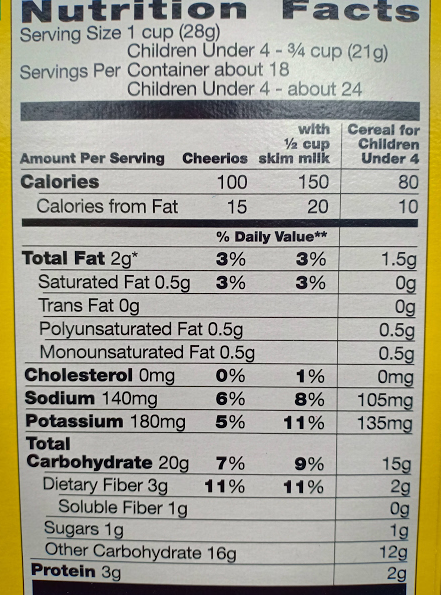 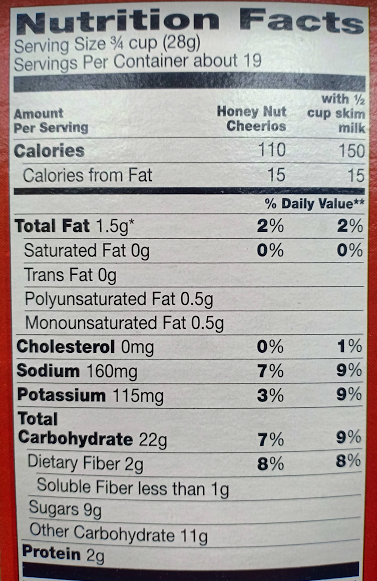 The nutrition facts do differ depending on the flavor, but not very much for the two most popular of the Cheerios: Original and Honey Nut... 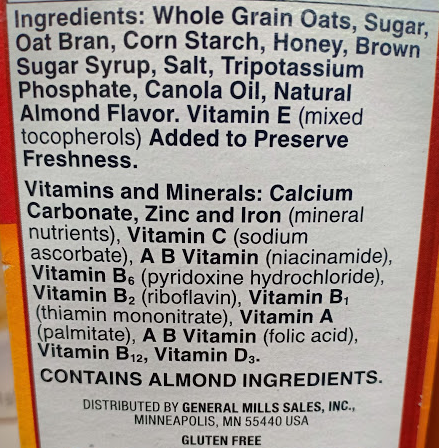 A nice healthy list of ingredients (excluding the sugars) indeed... but there are some reasons some people might come down with a case of diarrhea after consuming such.

Fiber is very important for proper digestion, but having too much or too little can cause diarrhea and other digestive issues.

The Original flavor contains 3g of fiber while the Honey Nut variety only contains 2g. This comes form the whole wheat oats and corn start which is contained in both, as well as the oat bran contained in some of the Cheerios varieties.

The problem here however isn't that there is too much fiber, but rather a lack of it. The FDA recommends 25g of fiber per day (based on a 2,000 calorie diet) and 2 - 3g isn't helping reach this number much, especially when considering that only about 5% of Americans get enough fiber.

When you couple this with the fact that most people eat cereal with milk, which has no fiber, this isn't a very good start to a fiber-rich day and could lead to diarrhea.

Having too much sugar can be a common cause of diarrhea. Too much sugar from foods causes more water to be pulled into the intestines to balance out the solute (sugar), and this can lead to watery stools.

The Cheerios Original formulation only contains 1g of sugar, however, the Honey Nut variety and many of the other flavors have much more. For example, Honey Nut has 9g of sugar per serving and Cheerios Protein has 16-17g... a huge difference!

Some of the Cheerios varieties, such as Honey Nut, also has fructose. About half of the sugar in honey is from fructose and this sugar is particularly difficult for the body to digest efficiently. Fructose malabsorbance is the name for this condition and the Genetics Home Reference estimates about 40% of people have in the western hemisphere, at least to some extent. This is one of the common reasons people experience diarrhea after eating high-fructose fruits such as grapes, watermelon, strawberries, etc.

The intestines can become irritated for various reasons. Spicy foods may cause irritation for some, fiber for others. When irritated this can cause the muscles of the intestines to contract more rapidly to try to get rid of the irritant, thus leading to diarrhea.

Some sources will tell you that oat-bran, one of the ingredients in many of the Cheerios flavors, is good for diarrhea. This is true to some extent. After all, oat-bran does contain the soluble fiber beta-glucan. However, oat-bran could possibly be an irritant to some people. This is possibly because oat-bran comes from the outer shell of oat seeds, which as you would expect is more fibrous and hard--and it is thought that this could irritate the lining of the intestines.

In particular, people with IBS may want to avoid bran. There hasn't been much research into it, but a study in the 1990's found oat-bran made IBS symptoms worse for 55% of patients and better for only 10%.

Even without gluten there is still the possibility that you could have an oat allergy, or be slightly intolerant to oats.

There is a protein in oats called avenin, which is known to cause problems for some people. Whether you are have a minor intolerance to this protein or are full-blown allergic, both of which conditions can lead to a variety of symptoms...irritated itchy skin, rashes, runny nose, nausea, vomiting and possibly diarrhea.

In the case of an allergy, the body mistakes this avenin protein for an unwanted intruder that might cause harm. Although there is no real threat, the immune system takes action and creates anti-bodies to attack it.

Generally speaking, Cheerios are on the more healthy side of breakfast cereals. While "processed whole grains" might be a more accurate ingredient listing on their boxes, and while a fresh bowl of oatmeal is likely a better choice... the company still does a good job at keeping things semi-healthy... at least for the non-high sugar Cheerios varieties.

But diarrhea is a possibility and the 4 causes listed above should be considered. Gluten is another possibility. A 2017 study by Nima (after Cheerios began to be labeled "gluten-free") found gluten in 12.5% of samples tested. And, the Canadian Celiac Association even warned caliac sufferers about consuming such because of the level of difficulty that comes from the removal of gluten-containing grains--since the whole oats that General Mills gets comes from farms that rotate crops. That said, Cheerios are tested by the company to be below the FDA required 20ppm to be able to be called "gluten-free".

In other words... there is still gluten, just hardly any.

Recommended: Foods to Eat When You Have Diarrhea

Now It's Your Turn: What has your experience with Cheerios been like? Leave your comments below! We like to hear back from our readers 🙂