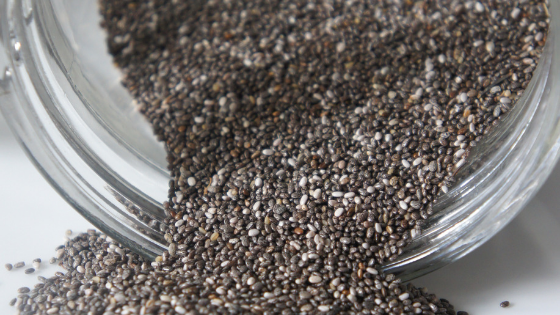 Do Chia Seeds Make You Poop Excessively? – Why They Can!

Is it true that Chia seeds make you poop? And if so, do they make you poop too much...will you be running to the bathroom every 10 minutes and spending an excessive amount of time on the toilet?

The truth is that, yes, they can make you poop. However, this is best seen as a good thing. It is possible that they can cause diarrhea, which nobody wants to have to deal with, but generally speaking they will be good for digestion and help lead to healthy bowel movements.

And that is probably a relief to hear, right?

We all love our Chia seeds. You can mix them in with yogurt, put them in your smoothies, or even eat Chia seed- filled bread. They are a great addition to many meals and very easy to incorporate into one's diet.

The Chia seed comes from the plant salvia hispanica and have a rich history of consumption. These little guys have supposedly been used by the Mayans and Aztecs of ancient Central America to conjure up supernatural powers, dating back to at least 3500 BC.

Although you probably shouldn't expect to get superpowers after eating them, they can do a great deal for your health, due to being…

But yes... They can make you poop. And this is a good thing if you suffer from constipation, but a bad thing if you end up pooping too much.

Let's discuss why they may have such an effect…

4 Reasons They Can Make You Poop

Fiber, we all need it for healthy bowel movements, but having too much of it can cause problems.

There are 2 types of fibers out there, insoluble fiber and soluble fiber. Insoluble fiber is great and all, but this is what can cause diarrhea when consumed in too high amounts.

Chia seeds have about 10g of fiber per 1oz (28.4g). About 83% of their entire carbohydrate content is fiber, and the majority of this fiber is insoluble.

This is absolutely great if you have constipation, but could cause unwanted runny stools for some. The fiber can help bring more water into the intestines and, at times, too darn much of it. In addition to bringing in more water, it also adds bulk to your stool.

We all want fiber but we all want the "right amount" of it. How much should you be getting? This all depends on the total amount of food you eat and what types of food you're eating. It is going to depend and will vary per person.

A very general rule of thumb is to try to get around 14 g of fiber per every 1000 cal of food that you eat.

2. A Good Source of Healthy Fats

According to Healthline, about 75% of the fat in chia seeds is of the omega-3 variety and about 20% is omega-6 fat. Chia seeds happen to be the best source of omega-3 fatty acids that the plant kingdom has to offer.

This is heart healthy fat that is good for you, but if you take in too much of this then diarrhea may be a potential outcome.

The USDA lists them as having 95mg per 1oz. That is a pretty hefty amount. And unfortunately magnesium is known to have a laxative effect when taken in high doses.

Magnesium helps to neutralize stomach acid and move stool faster throughout the intestines.

Now this is something that "probably" won't cause diarrhea for most people, but if your diet is already extremely high in magnesium, consuming Chia seeds could potentially tip the scales a little too much.

And then of course allergies are also a potential reason for diarrhea after consuming Chia seeds. If this is the case, you will start to notice symptoms pretty much immediately after consumption. These are extremely rare but have still been documented.

Symptoms such as vomiting, diarrhea and itching around the mouth can occur.

The reason for such a reaction would be due to the proteins contained in Chia seeds, which are actually from protein families that are known to be allergens.

Basically what happens in such a situation is your body's immune system mistakes the foreign proteins as invaders and mounts an attack, although they are harmless.

How Much Should You Eat?

We know that there are some Chia seed fanatics out there that mix this stuff in with just about every meal, but you really don't need much.

About 2 to 3 tablespoons per day is what you should probably limit yourself at.

But again, this is just a very general statement. It depends on the person and what the rest of your diet is looking like.

For reference: 1 ounce is about 2 heaping tablespoons of Chia seeds.

And.. Why They Can Help Diarrhea Too... Yes That's Right

Although consuming Chia seeds "can" cause you to poop a little bit too much, they also can actually help with diarrhea as well.

As mentioned earlier, they contain both soluble and insoluble fiber. While most of the fiber that they contain is insoluble, the soluble fiber is still there… At about a 7:1 ratio. According to some sources this is still enough to allow them to absorb up to 27 times their weight in water (source: WebMD).

The soluble fiber soaks up water and forms a gel-like substance. And as you can imagine, soaking up excess water is good for reducing diarrhea and normalizing bowel movements.

If you are pooping too much then you may want to try eating dry Chia seeds or powder if possible. Some people say that this is the way to do it, and it does make some sense since you want it to absorb as much water as possible in your digestive system.

What to Make of This Information..

There is a lot of talk about what it "can" do, BUT what is it really going to do?

Well... Unfortunately there is no good answer to this question. As already stated above, it will depend on the person and the rest of that person's diet.

Fiber imbalance is by far one of the most common causes of diarrhea. If you are already consuming a diet extremely high in fiber, adding Chia seeds into it may make your fiber intake too much and may cause loose stools. But if you are slightly constipated this can be a good thing. And if you are eating a well-balanced diet you probably won't have any problem adding Chia seeds to the mix.

Although they "can" cause excessive pooping, they probably won't.

So go out and buy a bag! Add them to your diet. Mix them in with your yogurts and smoothies.

They or a great source of many nutrients, even the micronutrients such as…